City of Angels 2012 to present

My personal story written in 2006 is at: CityofAngels1

And CityofAngels2 is Part 2 of my story still in progress.
AND
At CofA 15 Faster Than Speed of Life is a story in progress to be made into a miniseries in 2020.

Montage to send to agents

This site is copyrighted by my statement. Kay Ebeling

Kay Ebeling
Producing City of Angels Blog, first as coverage of the pedophile priest epidemic in the Catholic Church as one of the survivors, since Jan. 2007

I Trained To Do This Blog At NASA

.
I must have been living faster than the speed of life all the time by the 1970s. Otherwise how the heck would I have ended up at NASA in the first place? My job there was primarily editing the inhouse newspaper that went to 50 thousand or so employees and journalists, covering work at LBJ Space Center in Houston. So I'd gather news about the space shuttle and related projects and report on it to this wide but closely targeted audience, much like I did with City of Angels from Jan. 2007 until the blog fizzled and burned up in the atmosphere, pretty much, in 2010.... 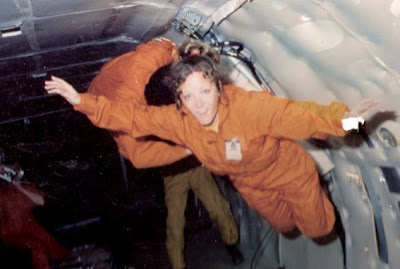 I lived a life led by compulsions put in me when a Catholic priest "sexualized" me at age five. Promiscuity, or "sexual confusion," is an inevitable effect on the victim of child sex assault, as we grow up, when and if we make it to adulthood. Add to it that in my case the molester was a priest, God and the sky got added in to the confusion.... I ended up in my thirties chasing astronauts in Houston, and the period I worked at NASA, 1978-1983, is a time I remember in dark shame. 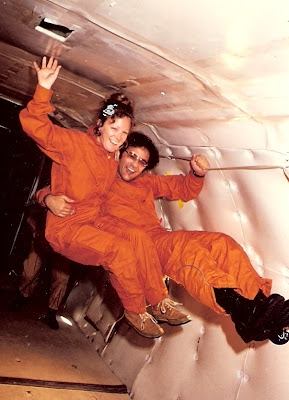 This could be a comedy routine: Thanks to Fr. Horne-y, I had to be with men in high places, connected to the sky, so I went to work at NASA.

The KC-135 aircraft on which we are flying in these shots was known as the "vomit comet" because the jet flew parabolas- up and down and up and down. Astronauts and techs tested equipment and ways for humans to endure low gravity in space by riding on these KC135 flights over the Gulf of Mexico. 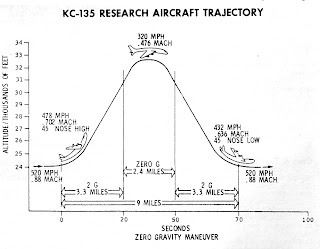 You got zero-gravity during the apex and double gravity while in the bottom half of the parabola (see illustration). Everyone throws up on the vomit comet, especially the first time they ride it. Me, I had no nausea at all, and I attributed it to the soda crackers in my flight suit pocket. But my t-shirt hidden under the zipper told the true story, "Better Living Through Chemicals," illustrated with a graphic leaf of fine cannibas. 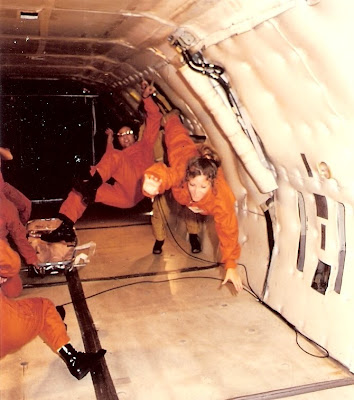 I knew is 1979 that cannabis was being used to stop nausea. It was Texas, easy to get weed, if you were fearless.... I mean, in that state in the 1970s they still put you in prison for possession of less than an ounce.

For these zero-G trips, I drove onto the Air Force Base used by LBJ Space Center, parked, pulled out a baggie or unwrapped a hidden piece of foil, toked on the joint I'd taken out, then suited up for the flight.

Nothing could stop me by then.

I was impervious, having gotten into and survived several scrapes with death by 1979, such as this one in 1966. So when I was at NASA, I could do anything, even toke up on pot on an Air Force base in my car, before getting on a test flight to cover experiments as a journalst.

Plus, I was always in pursuit of the priest. There was always this underlying breathlessness as I confused sex with everything else in life, while trying to be straight and professional.

My job on these flights was to take pictures and then do a story for release to media and for the inhouse newspaper, Space News Roundup. I had the journalist grad's dream job, and I literally screwed it up, by confusing men who had a connection to the sky with the priest I had been pursuing in compulsion since puberty.

Here is the story that resulted from one of these flights: (Top and bottom half of P. 4, see front page below:) 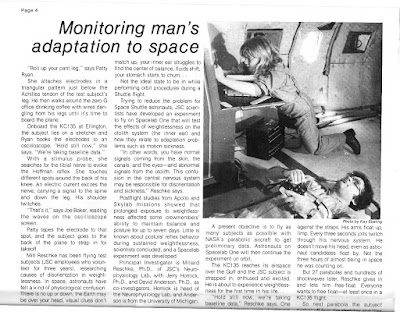 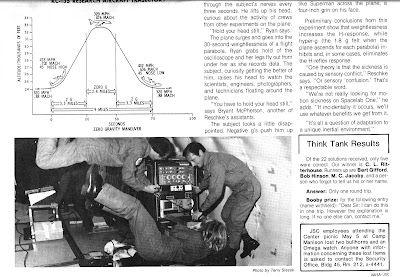 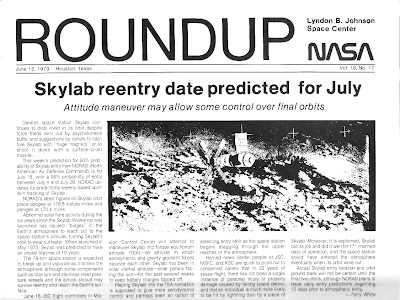 WOW!
Look what else I found! I edited and recorded these updates of Skylab as it re-entered the Earth's atmosphere, remember that? 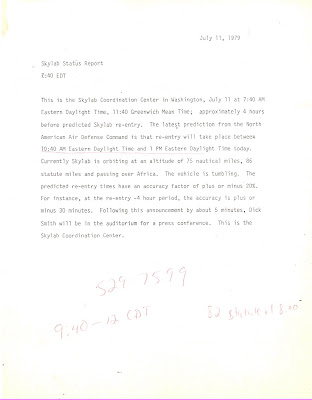 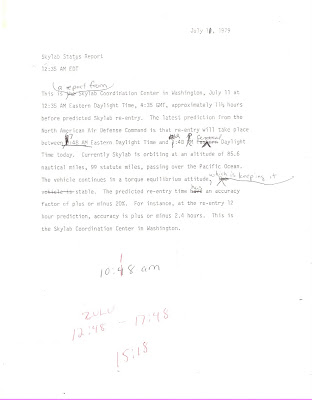 EDITING NORAD?
Me? Kay Ebeling?
Who once passed a hasheesh pipe with Timothy Leary?
Man, what a pedophile priest affected compulsive pursuit in life can lead you into... (PS: Never shared my scientific results, on the use of marijuana to prevent nausea in space, with NASA bosses at the time though...) 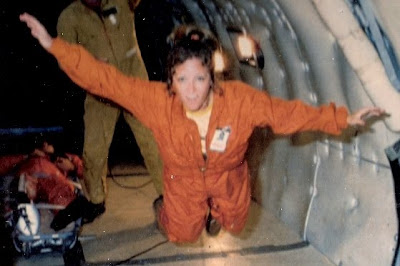 All this ability I had, all this skill, and I never experienced success, because of the compulsion. My sexual acting out, done almost by rote like I was pre-conditioned, always got me shunned and ousted. No matter how good a job I did, no matter how upright and disciplined and productive I made myself- I'd always get fired. 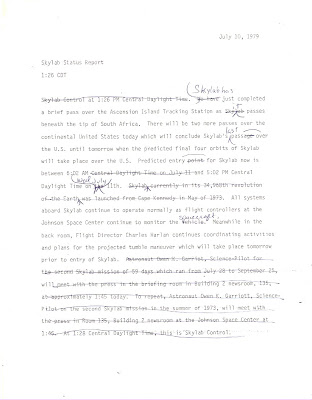 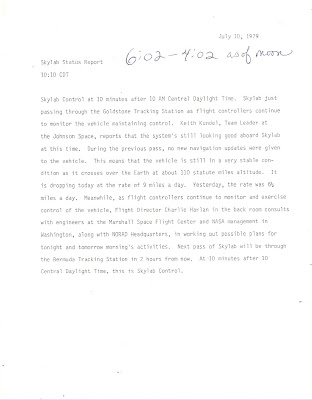 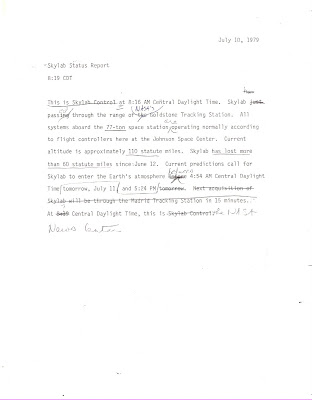 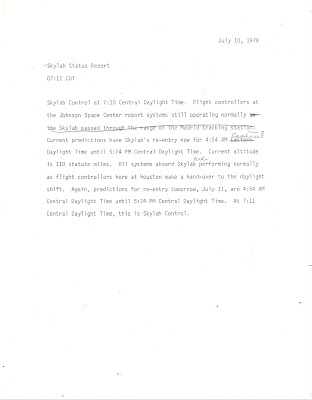 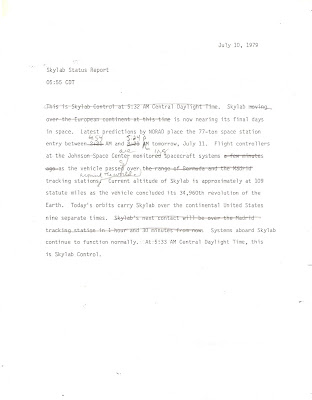 I think there was a call-in number for people to get updates, and it ran these recorded messages. We manned the newsroom 24-hours as Skylab re-entered, only mission I ever got to work on while I was at NASA.... 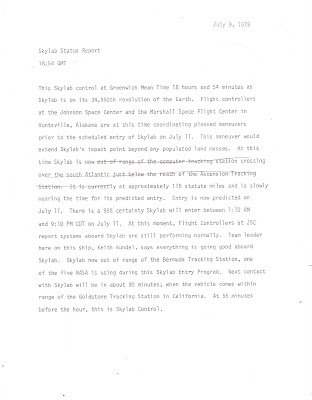 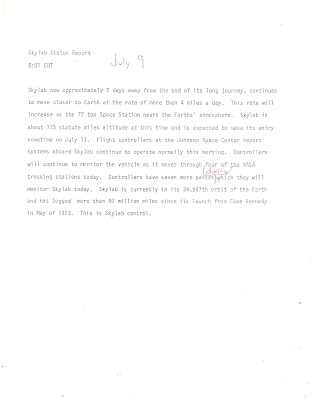 To comment email cityofangelslady@yahoo.com with COMMENT in the subject line. Only comments that come to my email will be posted.